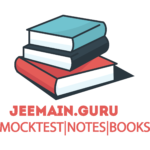 Now get the best preparation questions and solutions for jee mains and Advanced by Jeemain.guru, Law of motion physics

1. Which of the following cases the net force acting on the body is not zero?

(a) A drop of rain falling down with a constant speed

(c) A car moving with a constant speed of

(d) A pebble of mass 0.05 kg is thrown vertically upwards

The force exerted by the engine is balanced by the friction due to rough road. As the car is moving with constant velocity, it’s acceleration a=0 Hence. Net force on the car, F=ma=0

Whenever a body is thrown vertically upwards gravitational pull of earth gives it a uniform acceleration a=g in downward direction.

Hence, net force on the pebble

2. Which one of the following statements is not true about Newton’s second law of motion

(b) The second law of motion is a vector law

(d) The second law of motion is not a local law

(d) : The second law of motion is a local law which means that force

at that point at that instant. Acceleration here and now is determined by the force here and now, not by any history or the motion of the particle.

3. A rocket is going upwards with accelerated motion. A man sitting in it feels his weight increased 5 times his own weight. It the mass of the rocket including that of the the man is

, how much force is being applied by rocket engine? (Take g =

(b) : As the weight of man increased by 5 times , so acceleration of the rocket,

Force applied by rocket engine is

4. A trolley of mass 20 kg is attached to a block of mass 4 kg by a massless string passing over a frictionless pulley as shown in the figure. If the coefficient of kinetic friction between trolley and the surface is 0.02, then the acceleration of the trolley and block system is (Take

As the string is inextensible, and the pulley is smooth, therefore both the 4kg block and the 20 kg trolley have the same acceleration a

Let T be tension in the string

The equation of motion of the trolley is

5. A person of mass 50 kg stands on a weighing scale on a lift. If the lift is ascending upwards with a uniform acceleration of

, what would be the reading of the weighing scale? (Take

(c): The reading on the scale is a measure of the force on the floor by the person. By the Newton’s third law this is equal and opposite to the normal force N on the person by the floor

When the lift is ascending upwards with a acceleration of

The reading of weight machine is 95 kg

[because the lift is moving downward with a = g]

7. Two blocks are connected by a string as shown in the diagram. The upper block is hung by another string. A force F applied on the upper string produces an acceleration of

in the upward direction in both the blocks. If T and

be the tensions in the two parts of the string, then

8. A block of mass 50 kg slides over a horizontal distance of 1 m.  If the coefficient of friction between their surfaces is 0.2, then work done against friction is

and in the second case

12. A block of mass ‘m’ is slipping down a rough inclined plane with constant speed. The force on block by plane is –

(c) Depends upon coefficient of friction

(d) Depends upon angle of inclination

As block is slipping with constant speed

13. A bullet fired into a wooden block, loses half of its velocity after penetrating 90 cm. Before coming to rest it penetrates a further distance of –

ABOUT US
Welcome to JEEMAIN.GURU, Best educational blog for IIT JEE aspirants. JEEMAIN.GURU is a free educational site for students, we started jeemain.guru as a passion now we hope that this site would help students to find their required study materials for free. Thankyou
Contact us: contact@jeemain.guru
FOLLOW US
© jeemain.guru@2021
MORE STORIES